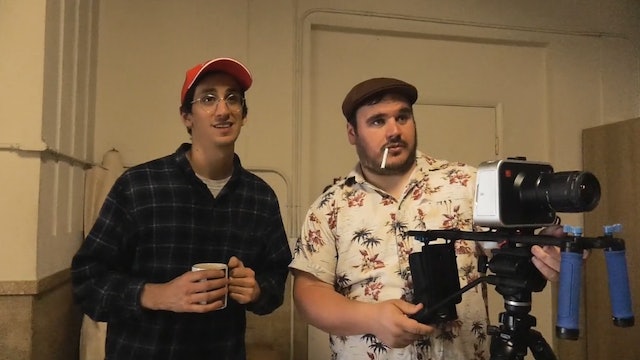 Alex Kavutskiy, the L.A. filmmaker and self-proclaimed Channel 101* legend, walks us through a series of steps required to make quality films. “Alex Kavutskiy’s Guide to Filmmaking,” is a six-part comedy series characterized by endless layers of meta, hyperactive editing, and general irreverence towards all things instructional or obvious. (*Channel 101 is a long-running L.A. comedy screening series where audiences vote for projects to either make further episodes or be canceled.) NoBudge regular Jon Millstein portrays Kavutskiy as he instructs his master class by making a movie himself. His first piece of advice? The writing process is “too hard” and a “total time suck,” so what you should do instead, is use an existing script, like “My Cousin Vinny,” and simply remake that. While filming the first scene, an on-set accident sends the production merging weirdly into the plot of the Joe Pesci / Marisa Tomei classic. From there, the “Guide” continues to zigzag wildly, wherever it wants — into extended explanations of a director’s use of the words, “Action!” and “Cut!”, or into fake Pepsi commercials where brightly-costumed actors loudly proclaim that drinking soda makes them cum. My personal favorite is Episode 3, which discusses all things editing, including what you can and can’t edit out of your own life (note: you can’t edit out when a family member dies). As the series reaches its later eps, resentment and disinterest begin to filter in, in part due to dropping audience ratings at the live screenings. Episode 4 finds the team digressing into a guide to “Mamma Mia”, and the 5th is just an episode of another Channel 101 show called “Blake and Blake”. The wondrously overstuffed finale clocks in at 20 minutes and involves ghosts, Santa Clause, and St. Peter at the gates of heaven. Alex Kavutskiy and his ragtag team of collaborators (all hilarious) nail a tone somewhere between kids using a camcorder for the first time, and adults obligated to finish a project, and the result is a consistently inspired gag. TRT: (45 minutes). Written, directed and shot by Alex Kavutskiy (see also: “Sound Speeds” & the upcoming “Squirrel”. Edited by Budd Diaz (also a NoBudge regular) and Kelsy Abbott. Starring Jon Millstein, Budd Diaz, Kelsy Abbott, Curt Neill, Willy Roberts, Eric Falconer and Kate Freund.