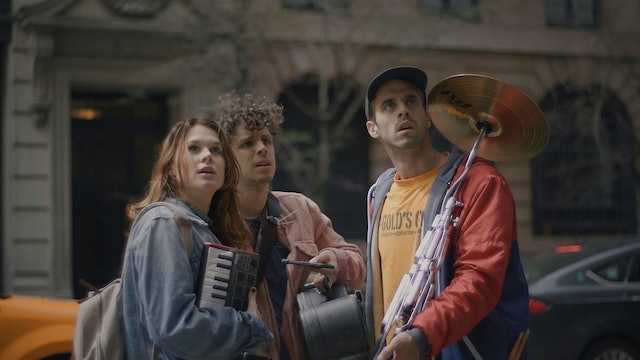 A no-name indie rock band schlepps their gear from a cramped practice space in Bushwick to a show in Manhattan. The comedy “Tired Eyes,” directed by Ryan Martin Brown, nails the plight of the broke musician, desperate to find any way forward in a city overflowing with bands with no future. The trio struggles to make it to their latest show as they quarrel over whether they should be focused on booking shows or recording new songs (or whether temperatures in the 40’s are objectively cold). After scrambling to borrow a van, to no avail, they are forced to rely on the never reliable public transit system, before hurtling through the chaotic streets of NYC in search of the venue, or a reason to keep believing. With rolling energy and touches of physical humor, the film perfectly captures the mania / delusion inherent in chasing a dream that so many others are chasing (an inspired moment of acknowledgement comes when our protagonists run into another band in a comically similar predicament), and it’s another solid entry from 5th Floor Pictures, a Brooklyn-based production company responsible for “Limestone,” “Sickly,” and “Nora at the Beach,” among others. -KA. Writer, director: Ryan Martin Brown. Starring Emily DeForest, Steven Carter, Cecil Jennings. DoP: Trevor Viner. Editors: Max Allman & Byron Leon. Produced by: Byron Leon & Paula Andrea Gonzalez-Nasser. PD: Alexandria Sherman. Music by winded & charles spears.